Legendary Gambian player Biri-Biri died last week. He was 72 and his family soothe the feeling of his many lovers by saying that they were proud of the amount of love displayed for him.

They however did not forget those who stood by him even during his last few weeks on earth. One of those many individuals and groups is Wallidan FC.
The native home of the late legendary Biri-Biri, Walidan led by veteran club president Adama Halla Samba staged a coup de grace at his funeral Wednesday by presenting the legend’s No 10 Wallidan Jersey to President Barrow, a fan, and his wife and sport minister Hadrammeh Sidibbeh, his former teammate.

That solemn public gesture was just the latest in a long and on-going elaborate programme by the club to put Biri’s enviable record and standing in the most important chapters of Gambian life.

”Actually the club has since more than three years started printing that No 10 jersey replicas for distribution on sale. But as was typical of him, Biri directed that the shirts should not be on sale for now but just freely distributed to fans mainly at league matches and each year we print about 150 of the Number 10 jersey for free distribution ,” said Alieu  Ceesay current President of Wallidan FC.

He said Biri had always been a proud history of Wallidan and the club has never relented in according him the respected treatment his greatness deserved.”During his life time, he was made honorary life captain of the team

and he was very much part of the family of our late founder OB Conateh,” Ceesay said.
The Club president disclosed that Biri was perhaps one of the only complete and deeply rooted Wallidan player because the club was in his blood literally. “His brother Bakai played for Wallidan, his best friend uncle Pa Faal too played for Wallidan and so did his sons Mod Njie and Yusufa,” Ceesay said.

He said Biri had some 35 years playing history with Wallidan because whenever he came back to The Gambia during the days he was away, he still played for Wallidan.” So what we working on is to perhaps retire the No 10 for three and half years to symbolically count for the 35 years he stayed at the club. However, all our training jerseys are inscribed with the Number10 figure, all in respect and tribute to him,” the Club president said. 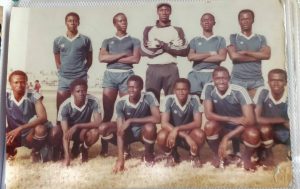 He recalled that the first Wallidan-own team van in the 1990s had a giant Biri-Biri image printed on its sides and was famously called Biri-Biri van. “That van used to transport him to his house each match day and some of us little boys were always excited and waited for him to routinely give us sweets whenever he arrived on the van,” Ceesay recalled . “So Wallidan had always celebrated Biri while others follow. In fact in this coming December Wallidan is organising a gala dinner to honour the founder OB Conateh and other legends and naturally Biri is very much part of the group to be honoured. He knew about this event which sadly will now honour him posthumously,” Ceesay noted.